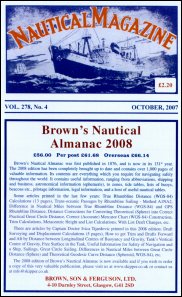 Any mariner of a certain age will know the name of Brown, Son and Ferguson as publishers of nautical texts. On my way looking for something else I came across this website, http://www.skipper.co.uk/which is in fact the website for the company.

I was a bit surprised that they continue to exist, though after 132 years I would imagine the have acquired a bit of savvy about what it takes to survive. It is not the best website I have ever seen but it's interesting to take a poke around and see what is still being published.

I notice that they still are publishing Nicholls Concise Guide, both volumes, though I wonder if the same deep knowledge of astronomy and spherical trigonometry is still required today when your mobile phone can give you a position many times more accurate than what you ever determined with your sextant!

Alas, my chosen navigation text Munros is apparently not in print anymore. (You basically chose to go with one text or the other and stuck with them throughout your exams) Munros appealed to me for their quirkiness, every chapter began with a quote from Shakespeare for instance. The chapter on Azimuths and Amplitudes began "I am as constant as a northern star, of whose fixed and resting quality there is no equal in the firmament".  Curiously I can remember the quote but I would suspect I'm bloody hopeless at doing amplitudes.