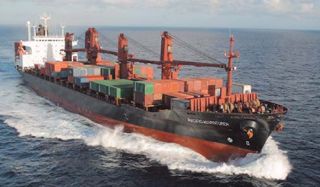 I've attached an article on the bottom of this post from a recent issue of Lloyd's LIst DCN from Australia.(LLDCN Is part of the Informa group who also publish Lloyd's List, the newspaper in the UK but are more of a semi-independent paper focused on multi-modal transport in Australia.)

The Pacific Adventurer was a general cargo ship owned by Swire's that had an unfortunate incident  off the coast of Australia. She left port in bad weather and she lost some containers which managed to punch a hole in the bow of the ship thereby losing bunkers.The really unfortunate part of it was that it happened just before a state election in Queensland. I'd say there are some questions to be answered about why the ship set off straight into the teeth of a storm but a rational dialogue was not possible when the event occurred as the media twisted and mangled the story to sell more newspapers. In the words of Professor Gold, "Such reports appear to be generally based on conjecture, innuendo and a total lack of understanding of ship operations."

This article is by Edgar Gold, many people will recognize his name is being a rather well-known ex-mariner and professor of law at Dalhousie. if you haven't heard of him, a short biography is available here. It's a rare event when someone actually gets to straighten out yet another story of a shipping that has been incorrectly reported, read the article and see if you agree.