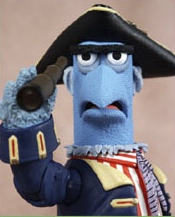 About 150 years ago  I sailed with a guy who had a real name but we
called him Sam The Eagle. Sam was the first mate and of advancing years
at that stage. (How his age then and my age now would compare I don't
want to think about.)  He was the first person I ever met who had gone
to sea under sail. His description of what that life was like certainly
kicked out of my mind any idea of romance under sail. The conditions
were tough and the men were tougher. The fact that the sail trade was
on its last gasp, the battle having been lost to steam many years ago,
only exacerbated the desperateness of the situation. To say that corners were cut to save money, and at the risk of the average matelots life would be an understatement.

You would
think or you wouldn't be surprised if I said that this was brought up
frequently in the sense of, "you think it's tough now, you should have
seen it then" but that wasn't the case with Sam The Eagle, being the kind of gentleman that he was. He would offer that things had improved from the days of sail till then but that this was only part of the journey and there still was a long way to go. Whenever a new mate would join the ship,  and in particular for the junior officers, he would tell them that he had read recently that going to sea was no longer as dangerous as coal mining. He would then pause for a second and deliver the zinger, it's now more bloody dangerous than coal mining.

This was at the beginning of the 80s, a shameful decade with regards to the safety of bulk carriers. For a certain period bulk carriers were disappearing at the rate of one a month, taking with them the crew. There wasn't a lot of attention paid in the shipping world to the problem, and a damn sight less outside.

The recent to do about piracy off the Horn of Africa brings back the thought of the cheapness of the  value of the life of ships crews from those times. Some of the hijackings have been dramatic enough to attract media attention, thank goodness.  For with media attention comes government attention, and that is why there is a trickle of destroyers on their way or in the area. However, just consider this; it each of the ships that is now being held hostage was a 747 in a major airport in a Western country, would it be a trickle, or would it be a flood?