What was that sound?? 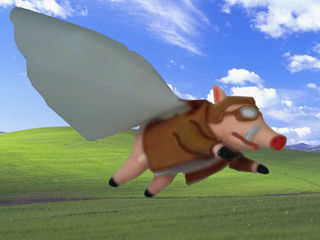 It was pigs flying overhead so fast they went back in time to the ice age when the snowballs had a chance in hell.

I made a post earlier in the year, Credit Where Credit Is Due (ok, it's only 3 entries before this one but it was back in February). It's not evident unless you watch the video but the subject was a new technology for displaying photos, I'm not talking about just a couple of snaps on a website  but thousands of pictures comprising terabytes of data. It's very impressive as demonstrated in the video. The sad part of course was that this company had been purchased by Microsoft, I think the fellows quote was, "I never thought I'd be working for Microsoft".

Flash forward a few months and they are now prepared to release the first application using this technology called Seadragon. The first application is unsurprisingly, a photo viewer, not for a desktop or laptop but rather for a handheld computer. The irony is that the application couldn't be released for Windows CE, the operating system for handhelds that Microsoft developed, but rather for the iPhone. Unfortunately as the MicroSoft rep said," Most phones out today don’t have accelerated graphics in them The
iPhone does and so it enabled us to do something that has been
previously difficult to do. I couldn’t just pick up a Blackberry or a
Nokia off the shelf and build Seadragon for it without GPU support.'

Damn, I hate it when that happens.

The link to the story is here for those wearing beanies and propellers: