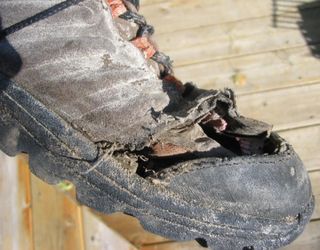 As so often happens an article in Mondays Lloyd's List caused me to ponder. The article was headlined, "Viking Islay master ‘failed in his duty of care' ". I quote directly from the article concerning the actions of some of the crew that lead to their deaths:

"The three men successively entered the vessel’s chain locker before
collapsing due to depleted oxygen in the enclosed space. At issue is
whether the crew members were made aware that the chain locker was a
dangerous place to go, whether they were aware the chain locker had to
be adequately vented before entry and why no tests were made of oxygen
levels in the locker."

The stupid thing of course is that the crew were entering the locker merely to fasten the hanging chain to prevent it from knocking on the side of the locker and keeping some of the crew awake.

The basis of the Crown's case was that the Master owed a duty of care to the crew to ensure they were not exposed to risk.The article doesn't mention a verdict so I assume that the case is ongoing.  Of course the Master does have a duty of care to the crew, as I recall it's crew, ship and then cargo. I won't offer an opinion on the Masters action or lack thereof, I'm sure that he's suffering in his own hell.

Undoubtedly there is a confined space entry protocol in the ship managers safety management system that was ignored. Was there a warning about oxidisation in the procedure? Was not the Master or the first two crewmen aware of oxidisation in  a chain locker (or with many cargoes)?

Sadly I was witness to a similar accident when I was at sea, though I was a supernumerary on the ship.In that incident and in this one what distresses me the most is that besides the Masters ignorance (in both incidents) there were at least 3 other people involved who either were ignorant or ignored the procedures and the dangers of entering a compartment that had been closed for some time.

One of the most powerful tools in improving safety on a ship is getting
the crew to have a duty of care towards each other, it's way more
effective than written procedures or a knowledgeable Master. Did anyone
else know they were going to go into the chain locker? If so, did it
not strike anyone that this was a danger?

We had an incident in Australia that illustrates the point very neatly. A sailor on a FSO had a pair of work boots that were basically a few scraps of leather held together by laces. It became a running joke amongst the crew about just how bad the boots were. It all came to grief eventually, one day the particular seafarer was transferring from a boat to the loading buoy to do some servicing and of course twisted his ankle. At the time we were desperately trying to improve our not very impressive LTI rate and while the injury was relatively minor it was a setback we could have done without.

We did get some value out of the incident though, it became an excellent object lesson in how safety on board is everyone's responsibility and unless everyone is involved the results can be painful or even tragic.