Jack was every inch a sailor… 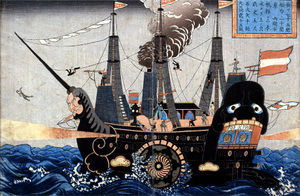 I was watching the BBC World News today when they had a short bit on a small container ship which was conducting a trial where it was being power assisted by a parasail (squished between pieces on the global market meltdown and the Oscar nominations, heady company indeed). The piece can be found on the BBC website, Kite To Pull Ship Across Atlantic.

Whenever a ship comes on the TV screen it coincides with the movement of my wife out of the room. Apparently the sight of a ship in a movie or on TV usually results in a rant that she’d rather not experience, ergo the exit stage left.  It’s really a relative thing though, the press referring to a general cargo ship as a tanker only really results in a sigh where on the other end of the scale when Gregory Peck (as Midshipman Hornblower) looks at the side of his sextant and reads the lat and long directly results in something more vocal and prolonged. (If you have no idea why that is so wrong the link for the latest Britney Spears news is here. )

The sail concept is interesting if it works, they are using a 160m2 sail for a 10,000 tonne ship and hoping to save 20% of their bunker consumption per day. Given the way bunker prices zoomed up this is not small potatoes.  The theory is that they can eventually deploy a sail as large as a football field. This would engender some interesting design work to be able to deploy and recover a sail that large. I believe that is why large sailing ships had 4 masts and many sails.

No all this was fine, what set me off was the BBC reporter intoning with grave concern that shipping accounted for twice the emissions than the whole of the airline industry. Well duh! But without picking up a calculator I think we can also imagine that the 24,000 ships in the world fleet will carry one hell of a lot more weight than the 5,000 passenger jets in the world.

As I recall several years ago the Vancouver Sun had a series on global warming and the reporter described breathlessly how a single ship consumed more fuel (and therefore emitted the same multiple) than 32 automobiles. The size of the ship was not described as I recall but counting on my fingertips and if we are kind let’s assume it was a 30,000tonne ship. Thirty two cars would carry 4 people, if each one weighed 200 lbs that would be 32x4x200lbs or 25,600lbs/12 tonnes. So by this reckoning the ship consumes more fuel than 32 cars but would carry 2,500 times as much weight! (You can infer the ship size by calculating the consumption of cars, assuming the speed they drive etc if you’re looking for something to fill in your spare time)

OK, up to this point it’s just been me gassing but in fact there are people who have looked at this and come up with a similar but much more accurate conclusion. The Australian Shipowners Association published a very interesting brochure, Sea Transport Efficiency and Greenhouse Gas Emissions in which they note:

The point, and I do have one, is that somewhere along the line ships and shipping have been concluded to be just plain BAD. Every ship that leaks oil is a tanker, if a ship is consuming fuel and emitting NOx and SOx it must be worse than a zillion cars (logic of scale notwithstanding). In fact ships are a very efficient way of moving freight, bigger ships an even more efficient way but with few exceptions I haven’t heard of any move lately to get freight off the road and onto a ship and I have to think part of this is because of our poor image, deserved or undeserved.

A few years ago there was a study done in Australia by the National Transport Commission (Twice The Task) about the freight task for Australia which concluded that the amount of freight that would have to be moved on the eastern side of Australia would double in the next ten years. This was going to require billions and billions in new roads and rail. How much consideration was given by the worthy authors to shifting the requirement to coastal shipping (where the capital requirement would fall on the owners rather than the taxpayer)? Nada, rien, zip.